In its new special report, the Intergovernmental Panel on Climate Change (IPCC) warns of the dramatic consequences of sea-level rise.

PD Dr. Jochen Hinkel, head of the GCF research process “Adaptation and Social Learning“, is one of the 100 coauthors from 30 countries of the IPCC special report “The ocean and the cryosphere”, that synthesizes the findings of more than 7,000 research articles.

See a corresponding article (in German) in the Berliner Zeitung HERE.

In its new special report, the Intergovernmental Panel on Climate Change (IPCC) warns of the dramatic consequences of sea-level rise. According to the report “The Ocean and the Cryopsphere in a changing climate” published today (Wednesday), sea levels could rise by one metre by the end of the century and by several metres by 2300. “The expected rise in sea levels poses enormous challenges to coastal areas around the world, but the risks are unevenly distributed,” says Dr Jochen Hinkel, co-author of the new IPCC report and scientist at the Berlin Global Climate Forum.
“In areas where there are few tides – for example in the tropics or inland seas – changes in mean sea levels are much more likely to result in more frequent flooding, because there are few and often no protective measures against higher water levels,” emphasizes Hinkel. “Conversely, there are dikes on the North Sea coast that are up to eight metres high and that offer protection even at slightly higher sea levels and can be raised if necessary.”

The expected rise in sea levels therefore poses not only immense technical but also economic and social challenges. According to the IPCC report, in which more than 100 scientists from 30 countries participated, rich urban areas can still be effectively protected from sea-level rise in the 21st century.

“Many metropolitan regions are located in river deltas and, by extracting groundwater and other resources, are experiencing a much faster rise in local sea levels than the rest of the world’s coastlines,” says Hinkel. “Some of these regions, such as the Japanese capital Tokyo or the Dutch cities of Rotterdam and Amsterdam, have shown that it is possible to successfully adapt to the high and rapid local sea-level rise.” The greatest risk posed by sea-level rise is for poorer and rural regions worldwide, the scientist stresses, where access to the necessary resources and effective protection measures are limited. “For these areas and their inhabitants, the situation during the 21st century could pose a threat to their livelihoods,” warns Hinkel.

But even more prosperous coastal cities will find it increasingly difficult to cope with the long-term sea-level rise of several metres that awaits us with continuing high greenhouse gas emissions. “The only way to protect ourselves from such disaster scenarios is to reduce greenhouse gas emissions rapidly and substantially. This could limit long-term sea-level rise to less than one metre,” says Hinkel.

Notes:
1 The IPCC report “The Ocean and the Cryosphere in a changing climate” can be downloaded from https://www.ipcc.ch/report/srocc/ from the end of the blocking period. 100 scientists from 30 countries participated in the special report. They examined around 7,000 scientific articles.
2 The Global Climate Forum is a research institution in Berlin for climate impact research. Based on the global socio-ecological systems they have developed, GCF scientists provide stakeholders, companies and civil society organisations with solutions for addressing climate change. One of the focal points is research on adaptation strategies to rising sea levels. http://www.globalclimateforum.org 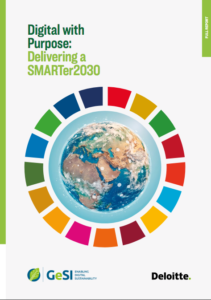 The Global Enabling Sustainability Initiative (GeSI), an institutional member of GCF, and Deloitte have launched a landmark report on “Digital with Purpose: Delivering a SMARTer2030” with the help from an international Expert Panel including Jeffrey Sachs, Christiana Figueres, and GCF chairperson Prof. Carlo Jaeger, among others.

The report finds that digital technologies, if deployed with positive societal impact in mind, will help accelerate progress toward the SDGs by 22% and mitigate downward trends by 23% on average. The report further finds that by 2030, digital technologies will deliver reductions in carbon emissions equivalent to nearly seven times the size of the growth in the ICT sector emissions footprint over the same period.