Klaus Hasselmann has earned the 2021 Nobel prize in physics for his breakthroughs in analysing the climate system as a complex physical system. Since decades, as a leading climate scientist he is aware of the need for creative cooperation between climate scientists and researchers from other fields, especially economics. To facilitate such cooperation, he has designed a productive research program for economic analysis in view of climate change. Without blurringthe differences between economics and physics, the Hasselmann program stresses the complexities of today’s economy. This includes the importance of heterogeneous actors and different time scales, of making major uncertainties explicit and bringing researchers and practitioners in close interaction. The program has triggered decades of collaborative research, especially in the network of the Global Climate Forum, that he has founded for this purpose. Research inspired by Hasselmann’s innovative ideas has led to a farewell to outdated economic approaches: single–equilibrium models, a single constant discount rate, framing the climate challenge as a kind of prisoner’s dilemma and framing it as a problem of scarcity requiring sacrifices from the majority of today’s population. Instead of presenting the climate problem as the ultimate apocalyptic narrative, he sees it as a challenge to be mastered. To meet this challenge requires careful research in order to identify underutilisation of human, technical and social capacities that offer the keys to a climate friendly world economy. Climate neutrality may then be achieved by activating these capacities through investment–oriented climate strategies, designed and implemented by different actors both in industrialised and developing countries. The difficulties to bring global greenhouse gas emissions down to net zero are enormous; the Hasselmann program holds promise of significant advances in this endeavour.
Access the paper HERE or through the link in the title.
https://globalclimateforum.org/wp-content/uploads/2017/07/GCF_Logo_line-1-300x73.png 0 0 Daniel Linke https://globalclimateforum.org/wp-content/uploads/2017/07/GCF_Logo_line-1-300x73.png Daniel Linke2022-08-31 11:43:472022-09-16 14:37:19New working paper: Klaus Hasselmann and Economics

To support discussions about the challenge of a sustainable mobility transition between researchers and stakeholders, such as practice experts, decision makers, and citizens, we have developed and tested an agent-based model and a mobile Decision Theatre set-up. Due to the combination of three elements: a) mathematical modelling and simulation, b) socio-ecological, including socio-economic, data and understanding, and c) a dialogue format based on the former two elements for bringing together researchers and stakeholders — we refer to the method as the Decision Theatre Triangle. This paper presents insights gained with the sustainable mobility case and, based on these, outlines research needs for turning this method into an easy-to-set-up instrument of science communication, decision support, and co-production of research for societal challenges more generally.

The European Green Deal aims at climate neutrality of Europe by 2050, implying a significant acceleration of emission reductions. To gain the necessary support, at the same time it needs to reduce regional and social inequalities in Europe. We propose objectives in terms of jobs, growth, and price stability to complement the emission reduction targets and present a proof-of-concept investment profile for reaching these. Substantial additional public investments, of about 1.8% of last year’s GDP annually, are proposed for the next decade. Their allocation includes retrofitting the European building stock, consciously fostering a renewal of the European innovation system, and complementary measures such as education and health. The scenario thus outlined is meant as an input to the urgently needed discussion about how the European Green Deal can shift the EU economy to a new development path that realizes a carbon neutral Europe by 2050 while strengthening European cohesion much earlier.
This paper presents a new and substantially updated version of the previous GCF Working Paper no 1/2020.
Access the paper HERE or through the link in the title.
https://globalclimateforum.org/wp-content/uploads/2017/07/GCF_Logo_line-1-300x73.png 0 0 Konstantin Winter https://globalclimateforum.org/wp-content/uploads/2017/07/GCF_Logo_line-1-300x73.png Konstantin Winter2021-02-04 16:24:382021-02-08 14:15:12New working paper: The European Green Deal, More than climate neutrality

With the personnel change at the top of both the European Commission and the European Central Bank, a Green Deal for Europe has been put on the agenda. To be politically feasible and socially acceptable, the European Green Deal needs to reduce not only emissions but also unemployment { especially youth unemployment { and regional as well as social inequality throughout Europe. This is possible if the Green Deal shifts the EU economy to a new development path. To provide an example showing feasibility, our paper presents a structure for the Green Deal based on large scale additional investments, in the order of 1% of GDP annually. It outlines how these can be funded, and estimates effects in terms of reaching the goals. An essential point is that the resources must be used in such a way as to trigger a renewal of the European innovation system; while being a challenge, the European Green Deal can thus also become an opportunity – and may be the only opportunity – to reach a carbon neutral European economy by 2050 and to revert the trend of decreasing social cohesion in Europe much earlier.

An updated version of GCF Working Paper 2 / 2017 “Framing 1.5°C – Turning an investment challenge into a green growth opportunity” that reflects the current IPCC Special Report on 1.5°C is now published on SSRN under:
https://papers.ssrn.com/sol3/papers.cfm?abstract_id=3324509

In the Global System Science (GSS) field simulations of Agent Based Models (ABM) can be challenging regarding the needed computer resources, so that it’s necessary to run the simulation on computer clusters. The existing HPC ready ABM frameworks does not fit well to the structure of GSS models. This paper proposes a parallelization strategy that take GSS needs into consideration and tries to find a good balance between the needs of the modeler and restrictions that enables a good scalability. It represent the model structure as a directed multi-graph, where spatial information is added as nodes. Existing hypergraph partitioning software can then be used the distribute the agents to the different processing elements.

The paper can be downloaded here: GCF_WorkingPaper3-2018

The complexity of sustainability transitions calls for transdisciplinary dialogue processes among dierent stakeholder groups. When policy options are discussed with decision-makers, scientists often support them with the help of quantitative outputs provided by simulation models. With the increasing complexity of models in times of big data and high-performance computing, making the model and its parameters transparent and integrating them into stakeholder dialogues is essential for successful and democratic decision-making processes. Furthermore, such integration allows for the discussion of a broader variety of pathways or scenarios supplied by models. END_OF_DOCUMENT_TOKEN_TO_BE_REPLACED

Green growth holds the promise that solving environmental problems can at the same time create economic benefits. Yet, until now there is little analytically sound work on the possibility of such a dynamics. In this paper, we investigate conditions under which a transition from brown growth to green growth can improve the economic situation, both in the present and in the future. In our model, we combine three well-documented phenomena: the fact that a major aspect of technical change is learning by doing, the fact that learning by doing can develop in different directions, and the indeterminacy of labour markets resulting from the difficulty of matching the skills of people with the tasks arising in firms. The combination provides new insights for the discussion about the possibilities of green growth.

The paper can be downloaded here: GCF_WorkingPaper1-2018

GCF presented work on the diffusion of electric mobility in a green growth context at the Electric Vehicle Symposium in Stuttgart in October 2017. This working paper is a follow-up version of the paper prepared for this conference.

The paper can be downloaded here: GCF_WorkingPaper3-2017 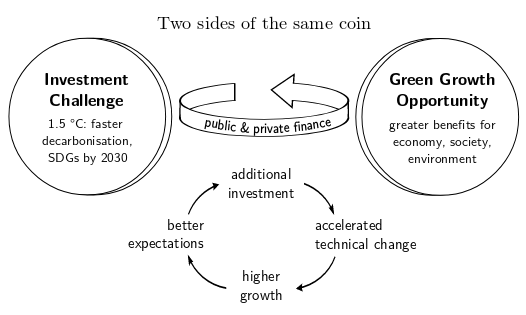 Our new working paper wants to contribute to the special report on the impacts of average global warming of 1.5°C above pre-industrial levels that the Intergovernmental Panel on Climate Change (IPCC) will produce in 2018. In contrast to a classical perspective on climate policy, which focuses on costs, our paper proposes a win-win framing: The 1:5C scenario should be seen as an opportunity for the world to achieve a Great Transition to green growth. END_OF_DOCUMENT_TOKEN_TO_BE_REPLACED